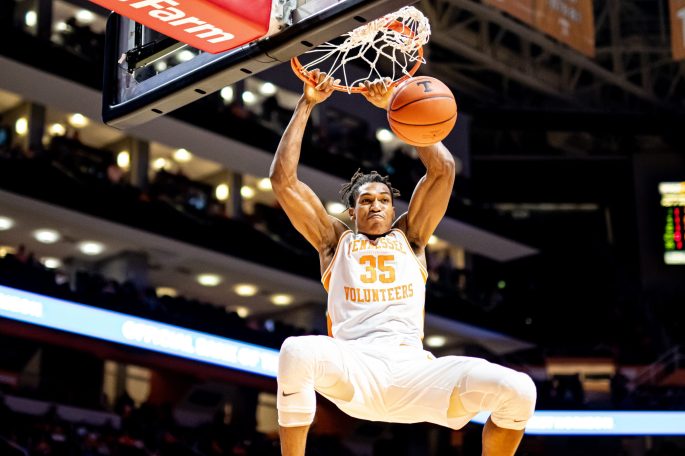 Tennessee has an elite recruiting class joining their roster this season, but they also have a huge difference maker in an elite returning guard who can help the Vols challenge for SEC supremacy and a potential deep run in March. Yves Pons made massive strides in his junior year, after two ho-hum seasons spent largely on the Tennessee bench. Pons minutes jumped from 11 minutes a game his sophomore year to nearly 34 in his junior campaign. Now it should be mentioned that Pons’ name is currently in the NBA Draft pool, so whether he returns is still up in the air. Many think he will return to the Vols, but the versatile wing has not announced a decision yet, with still nearly a month to make his decision.

As a junior, Pons, hailing from France, averaged 10.8 points and 5.4 rebounds, but, as he expressed in a recent interview, the Tennessee guard will make his money defensively whenever he turns pro, as he averaged 2.4 blocks per game. Not only did that mark lead the SEC with relative ease, but he was the only guard ranking in the top 50 nationally – a leaderboard dominated by forwards and centers.  This mix goes hard – check out some of Pons’ top highlights.

Offensively, Pons does much of his damage inside the arc, but his three-point shot proved a dangerous enough weapon to keep defenders honest. He poured in deep shots at a 35% clip, allowing him to thrive in two-point range, shooting a blistering 55% on such shots. Pons came out of the gate ready to go, putting up four straight double-digit scoring efforts to start the season. In five of his first six games, he blocked at least three shots. As the season wound towards the SEC portion of the schedule, Pons continued to put up some notable performances, headlined by one of his two double-doubles against Florida State, and a monster 6-block effort against Jacksonville State. In the conference opener, the international star jumped LSU for 18 points and three blocks to set the tone for SEC play. Three weeks later, the Vols drew Kansas in the Big 12/SEC challenge, and, although Tennessee fell just short of the stunner, Pons was virtually the sole reason they kept it close, as he lit up the Jayhawks for 24 points, 7 rebounds, and 3 blocks while not turning the ball over once. His other best effort of the SEC season was a 14 point, 14 rebound, and 3 block double-double performance, leading the Vols to a thrilling one-point win over Alabama. While maintaining his scoring average, Pons became more aggressive in the paint as well, snaring 6.6 rebounds per game over Tennessee’s final 10 contests.

If Pons chooses to return to Tennessee, the SEC will be put on notice – a dangerous Vols team with a star senior returner and elite incoming class? Nobody’s going to want to face Pons and Co. next year.