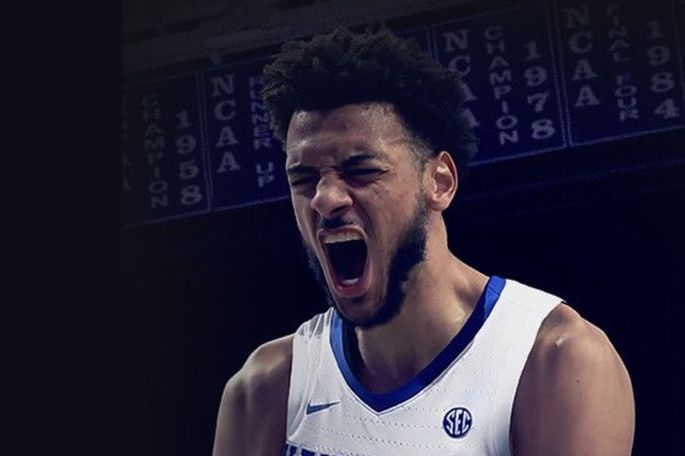 The world isn’t strictly dominated by college football, as NCAA Basketball made some big-time waves yesterday. Olivier Sarr made a huge announcement, declaring that he would be transferring from Wake Forest to Kentucky. Sarr is a 7’0 center who was one of the centerpieces of the Wake Forest offense, and he’s moving from the basement of the ACC to the top of the SEC, filling a big void inside the paint for the Wildcats. Duke, Baylor, Florida State, and Gonzaga were just a few of the powerhouses hoping to obtain Sarr’s services. He averaged 13.7 points and 9 rebounds per game last season.

In recruiting news, Notre Dame is working to rebound from their recruiting loss on Will Shipley. While they continue to search to add a running back to that 2021 class, they landed another four-star commitment from cornerback Phillip Riley. Riley had 38 offers, and he turned down most of the ACC, including Clemson, in favor of the Irish.
Another big commitment came from 4-star inside linebacker Easton Mascarenas, and the California product is going out of state, committing to Oregon State, where he will try to lift the Beavers back to Pac-12 relevancy. He chose Oregon State over ten other offers, mostly from Pac-12 schools, although his only in-state offer was San Diego State.

And now for your regularly scheduled “we hope and are optimistic sports will return soon” programming: In some exciting news, which should be taken with a grain of salt, a bevy of schools, including many SEC schools, announced their intention to open their doors this coming fall. The list of schools making this announcement included LSU, Alabama, Tennessee, Texas A&M, Arkansas, Georgia, and South Carolina. It’s not anything definitive, but it’s definitely a nice hope for the future. 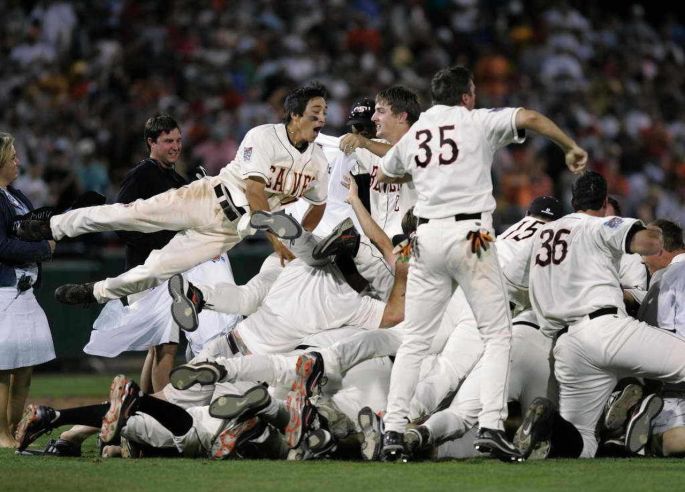 Coming in at #6 on our countdown of Top 7 all-time postseason college baseball moments is Oregon State’s shocking run to the 2006 College World Series title. The run wasn’t stunning because of Oregon State’s ranking – they were a 1-seed and ranked 14th in the country heading into the NCAA Tournament. Rather, what makes this run special was the adversity the Beavers overcame once they reached Omaha, and the upsets they swung to claim the title. Read a little about their season, and check out some great videos below!

Junior Cole Gillepsie led the ‘06 Beavers with a .374 average and outstanding .493 on-base percentage. His thirteen home runs also led Oregon State, who was built on speed and great pitching. The Beavers had 79 stolen bases, including four players with at least eleven, to just 36 home runs. On the mound, they were led by ace Jonah Nickerson, who pitched his way to a 13-4 record and 2.24 ERA. Kevin Gunderson was a superb option out of the bullpen, with twenty saves and a 1.03 WHIP.

The Beavers started their season just 12-7, which saw them slide off the national radar, but they rebounded by winning 27 of their final 34 games, claiming the Pac-10 record with a 16-7 mark in conference play. Their strong finish was rewarded with a #1 seed in the Corvallis regional, but the Beavers weren’t even close to being considered favorites, not even to make it to Omaha.

Oregon State worked quickly in Corvallis, sliding past fourth-seeded Wright State 5-3 in the opener before dominating Kansas and Hawaii by a combined score of 23-6. The Beavers advanced on to the Super Regionals where they received a welcome gift. Rather than third-ranked Texas awaiting Oregon State, the Beavers were met with Stanford, the third-seed out of Texas’s regional. However, the Cardinal were no joke, having scored 42 runs in three games.

Oregon State’s #2 pitcher – Dallas Buck – took the mound for the Beavers and put together a quality outing against Stanford’s lethal offense, limiting the Cardinal to three runs, which was enough for Oregon State to edge out a 4-3 victory. The second game was nowhere near as close, as Oregon State cruised to a 15-0 victory, riding a five-game winning streak into the College World Series.

However, Oregon State’s momentum came to a screaming halt in their opener in Omaha. Buck took the mound again and got absolutely lit up by Miami, a team that did not even finish the season in the Top 25. The Hurricanes scorched the Beavers 11-1, sending Oregon State tumbling into the loser’s bracket. After giving up just twelve runs in five prior NCAA Tournament games, it looked like the elevated competition was far too much for the Pac-10 champs. But the Beavers’ run was just starting.

Oregon State trusted Nickerson with the ball against #7 Georgia in their first elimination game, and their ace delivered, leading the Beavers to a 5-3 victory. That led Oregon State right back to Miami, but this time, the Beavers emerged on top. Sophomore Mike Stutes delivered a gem, and Oregon State cruised to an 8-1 victory. The win put the Beavers into the semifinals, but they were going to have to beat Rice – the #2 team in the country – twice in order to advance.

To start, with their top three starters unavailable, the Beavers turned to Daniel Turpen, who had started just two games all year. Turpen responded with a dazzling performance, firing 6 ⅔ innings of scoreless baseball, allowing just five hits. Oregon State won 5-0, earning a winners-take-all battle with the Owls. There, Oregon State could have given the ball to Buck on three days of rest, but given his struggles in the opening game, the Beavers went with Nickerson on just two days of rest. And there, Nickerson put forth the effort of a lifetime. Two days after he went seven innings and 114 pitches, Nickerson blew Rice away with 7 ⅔ innings of scoreless baseball. Meanwhile, the Beavers scratched out single runs in the second and fifth innings to piece together the 2-0 win. The win completed their gritty run through the loser’s bracket – their championship appearance marked the first time a team from the Northwest had made it that far in 57 years.

However, the road wasn’t over for the Beavers. After winning four straight elimination games, they found themselves back on the edge after dropping the opener of the best-of-three championship series, 4-3 to the North Carolina Tar Heels. It looked like Oregon State’s feel-good run would come to an end in a harsh way, as they fell behind 5-0 in the top of the fourth inning of Game 2. But Oregon State struck for seven runs in the bottom half of the inning, punctuated by Bill Rowe’s three-run home run. After getting the last out of the fourth inning, Kevin Gunderson finished the game with five innings of two-run ball, a season-high in innings and pitches for the Oregon State closer. Oregon State won 11-7. After the game, Gunderson confirmed he would be available for Game 3, saying “There’s no time to be sore”.

With their entire pitching staff taxed, Oregon State went back to their rock, giving Nickerson the ball one more time. Nickerson performed once more, hurling 6 ⅔ innings, giving up just two unearned runs, but he would not get the decision, leaving with the game tied 2-2. At that point, Oregon State brought in Dallas Buck again, despite Buck having started Game 1. Buck got five outs for the Beavers, which was long enough for Oregon State to claw out an unearned run in the bottom of the eighth inning. With one out in the ninth, the Beavers brought in Gunderson, who collected the final two outs for his twentieth and biggest save of the year, bringing a conclusion to one of the most stunning runs in College World Series history. Oregon State went 6-0 in elimination games.

The Aftermath
Nickerson was named the Tournament MVP, while Rowe, Gillespie, Gunderson, and infielder Shea McFeeley were added to the All-Tournament team. All five players, along with four others, were drafted in the 2006 MLB Draft, with Dallas Buck being the first Beaver off the board in the third round. Despite the major losses, Oregon State defended their title, winning it all again in 2007. 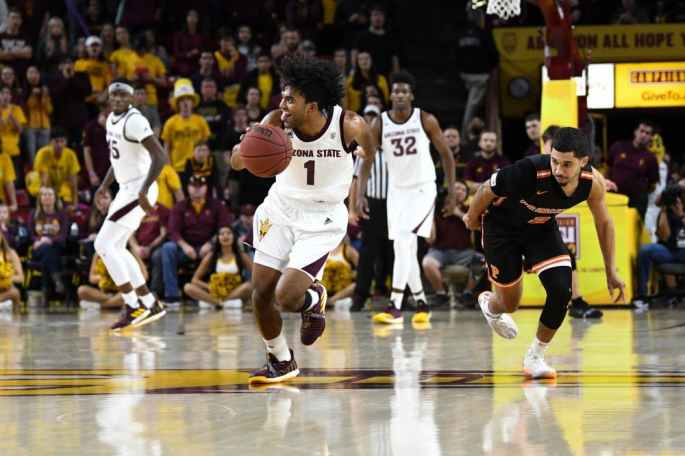 The Pac-12 had four matchups on Saturday, with one big upset and a huge statement victory among the results. Here are all the recaps and takeaways from Saturday along with the games to come today.

The Recap: 22 was a special number for Arizona State as they held Arizona to 22 second-half points to rally from a 22-point deficit and beat the #22 Wildcats 66-65. Remy Martin scored 24 to lead the Sun Devils while Alonzo Verge sank the game-winning layup with 9 seconds left.

The Takeaway: Arizona is not good away from home. The Wildcats are ranked due largely to their 10-1 home record, but they are now 0-4 in road games. Home court matters a lot to this squad – they beat the Sun Devils by 28 at home just weeks earlier.

The Recap: Tyler Bey scored 16, McKinley Wright IV had 15, and the #23 Buffaloes rode a 51-point first half to an easy win over Washington at home, improving to 5-2 in Pac-12 play and a three-way tie for second in the conference.

The Takeaway: Colorado’s depth is a huge strength: Big comebacks are hard enough to make, but overcoming an 18-point halftime deficit is near impossible when your opponent continuously has fresher legs on the court. Colorado had four players play at least 12 minutes off the bench, while Washington had one such player. Overall, Colorado’s bench outscored Washington’s 25-4, which may be a difference-maker in the postseason.

The Recap: Propelled by Onyeka Okongwu’s 18 points, USC dominated both halves and earned a huge road victory at Oregon State, keeping pace with Colorado and Oregon for second in the conference with their fourth win in five games.

The Takeaway: USC may be the most dangerous Pac-12 team in the Playoff: USC is now 5-2 in true road games and 7-4 in games played outside their home arena. That’s a huge advantage on every other Pac-12 team, and it could make a huge difference in the postseason, where most if not all games will be played on neutral courts.

The Recap: The Utes got a big day from Rylan Jones (24 points) and huge contributions off the bench from Mikael Jantunen (16 points) as they handled the Cougars for the second straight win following a four-game skid.

The Takeaway: Utah’s defense is their key to victory. The Utes have a decent offense that can put up 70 points a game, but they rarely blow you out of the water with a jaw-dropping offensive performance. However, in four Pac-12 losses, Utah is giving up 84 points a game, compared to 66 points a game in their 3 wins. If Utah figures out how to play consistently good defense, this team could make moves in March. 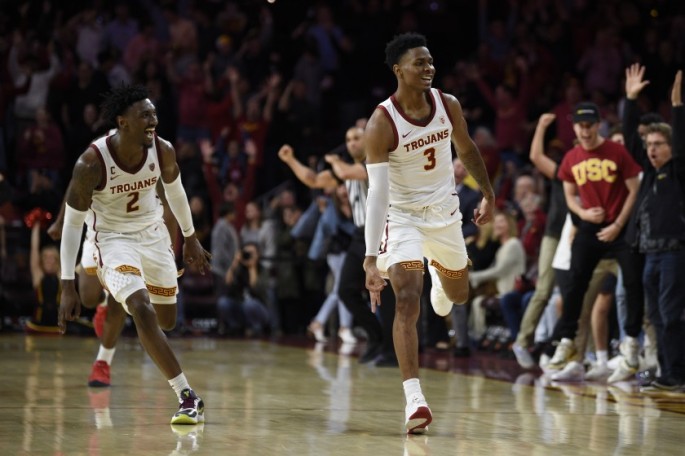 Last year, the Pac-12 sent just 3 teams to the NCAA tournament, the fewest of any Power-6 conference, and this year looks to be more of the same, unless some of the teams stuck in the mud can get unstuck really fast. As a whole, the conference is struggling, featuring just three ranked teams and just one in the Top 20. Arizona is still the title favorite in my mind, but Oregon and Colorado also seem like viable candidates. Identifying biggest risers and fallers is difficult in a conference where every team seems to be playing with consistent mediocrity, but here is our best shot: