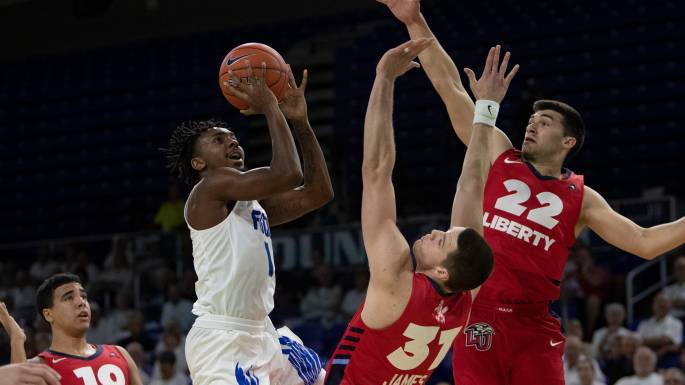 For mid-major conferences, every team lives and dies by the conference tournament. That is true in the Atlantic Sun conference, where only rarely does more than one team make the NCAA Tournament. This year, the A-Sun has a clear favorite in top-seeded Liberty, who is looking to take the conference title for the second straight year. Here are each of our predictions for how the A-Sun Conference Tournament will play out.

In a lull between the rush of conference games last night and the customary large slate of games this weekend, we pause to take a look at mid-majors around the country. Here are a few headlines to keep in mind as the season rolls on.

Should Gonzaga even count as a mid-major?

Get this team out of the West Coast conference. The Bulldogs have to load their non-conference schedule, because they play a ridiculous number of non-contenders for the bulk of the season. Take tonight for example; Gonzaga hosts Santa Clara –  a 15-3 team in the West Coast conference, and quite possibly the second best squad to the Bulldogs. Gonzaga enters the game as 19.5 point favorites. I know the logistics of this are quite likely impossible, but labeling Gonzaga a mid-major, when they’ve been to the Sweet Sixteen five straight years, winning three times and progressing to the Final Four once? It feels wrong.

The Aztecs continue to roll, boasting their best offense in 20 years that, along with an elite defense, has led them to an 18-0 record, including a 7-0 mark in Mountain West play. This has evolved from a surprising blistering hot start into a legitimate run at an undefeated season. Can anyone stop the Aztecs, or will they roll into the NCAA tournament without a blemish on their record? We looked at San Diego State’s remaining game, which all come against unranked opponents; they will be favored in each game, but is there a trap lying in wait for the Aztecs. If there is, I don’t believe it will be on their home court, as the Aztecs are the only team in the conference with a winning record. However, one game to me particularly stands out as a challenge: The Aztecs visit New Mexico on January 29. New Mexico is 15-4 on the year, a mark that includes a scorching 12-0 record at home. They are not easy to take down in their own building, and their home-court advantage may be the toughest thing standing between San Diego State and an unbeaten season. The Aztecs still have Nevada on the road, which is a potential spoiler to this showdown, but I still predict that the Aztecs will roll into New Mexico unbeaten for their biggest remaining test of the year.

The Best of the Rest

Obviously Gonzaga with their #1 ranking, and San Diego State and their undefeated season have stolen the headlines from mid-majors thus far this season. However, three other mid-major squads are ranked, and they all look to have the potential of making a run. Potentially the most lethal of these squads is the Dayton Flyers, who come in at #13. They have two losses to ranked teams and are undefeated in all other games, going 15-0 with an average margin of victory of 20 points against unranked squads. Not far behind the Flyers are Wichita State and Memphis. The Shockers were upset by Temple yesterday, but it was just their second loss of the season. They recently beat Memphis and took down a solid UConn team on the road to solidify themselves as a NCAA tournament contender. Memphis has been surprisingly impressive without James Wiseman, although they’ve been skidding recently. The Tigers lost to Georgia and Wichita before needing a big comeback to beat an 8-9 South Florida squad. They could still be really good, but they’ll need to snap out of their current skid to be taken more seriously.

Keep an eye on…

Liberty, Furman, Northern Iowa, and Yale. The Liberty Flames are a very quiet 18-1, with their lone loss coming at LSU. Their biggest win is only a road win over Vanderbilt, but 18-1 says something, so be sure to keep an eye on Liberty if they crack the tournament field.

Furman leads the Southern Conference with an 8-1 conference mark and a 15-4 overall record. They have no signature wins, but a pair of their losses say something significant about this team, as they went to Alabama and lost by just 8 (ask Auburn how difficult playing Tuscaloosa is). Speaking of Auburn, Furman visited them as well, and they fell just three points shy of the Tigers there as well. Two gutsy and close losses against quality SEC teams is nothing to sneeze at; if Furman falls as a 12 or 13 seed, nobody will want to play them.

Northern Iowa always seems to be in the mix of quality mid-majors, and they have a history of pulling upsets in March. As a 9-seed in 2010, Northern Iowa took down #1 Kansas, and as an #11 seed in 2016, the Panthers took down #6 Texas on a buzzer beater. They’re currently on a five game winning streak, and they already boast a win over South Carolina and a road victory over #20 Colorado. Will we see another big March upset from the Panthers in 2020?

Yale is more of a gut-feeling call right now. They haven’t played a conference game, but they’ve looked pretty good this season, and they always seem to be in the mix. They beat Clemson on the road, a win that looks way more impressive now than it did at the time. They will probably need to win the Ivy League to make the tournament field, but they have a habit of playing good teams close, so teams will be hoping to avoid a first round matchup with these guys.