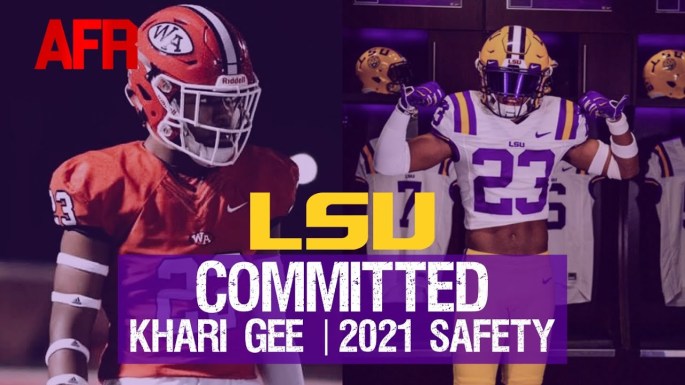 A product of Woodward Academy in Georgia, safety Khari Gee firmly announced his commitment to the LSU Tigers, giving the defending national champions a key defensive asset in their 2021 class. Gee’s recruitment was a wild one, as the offers for his services rolled in all winter, but Gee narrowed his list from thirty down to four or five, before his decision came down to LSU or their victim in last year’s national championship, Clemson. The #9 safety in the class, Gee said he was leaning towards LSU, and the commitment that head coach Ed Orgeron and his staff showed during his recruitment was a major factor.

The four-star safety is an elite athlete with great range and ball skills, and he will be a great piece in LSU’s defense, as the Tigers look to keep pace with the rapidly evolving air-raid attacks that are beginning to dominate college football. Gee, who was also a potential baseball prospect before quitting to focus on the gridiron, will likely look to add to his figure to prepare for the physicality of the SEC. It’s a huge pickup for LSU, as the Tigers land one of their top priorities of the 2021 recruiting cycle.

Notre Dame may have set a very important precedent on Monday, as they announced that they intend to hold classes on campus in the fall, albeit with an adjusted schedule. They plan to start classes August 10 – two weeks earlier than their original start date – and work straight to Thanksgiving without their traditional one-week Fall Break. They will then break for the semester at Thanksgiving, minimizing the possibilities of students leaving campus and transmitting the virus upon their return. Notre Dame’s final football game is currently scheduled for the weekend after Thanksgiving, so this potential plan doesn’t affect them too much, but it does seem to hamper the idea of a delayed start to the year. Expect a lot of schools to follow this trend, as schools search for feasible and safe ways to return to campus.