The 2019-2020 college basketball season may have abruptly ended prior to March Madness, but it’s not too early to take a look at next season – we will be looking at a few of the top players in college basketball entering next season. Today, we’re checking out the top three returning forwards and centers in the Big 10. Incoming freshman recruits were not included in these rankings – these only cover players who have already played a collegiate season (or at least, most of one season).

Jackson-Davis may have soared under the radar on a mediocre Indiana team next year, but even if he can’t single-handedly lift the Hoosiers back to glory, the rising sophomore forward looks ready for big things next season. Jackson-Davis’s stats were relatively modest in his freshman campaign  – 13.5 points and 8.5 rebounds per game – but he shot 57% from the field and put up some massive games in high-profile contests. After putting up solid numbers in a breezy start to Indiana’s non-conference slate, Jackson-Davis raised some eyebrows with a 15 point, 8 rebound performance against #17 Florida State. 25 points and 15 rebounds in an overtime victory over Nebraska, a double-double against #21 Iowa, and a 27-point, 16-rebound effort at Minnesota highlighted a few of his top performances in conference play. The Big 10 was one of the most wide-open conferences, so the Hoosiers have a chance to shoot back up into the mix for the top seeds, and expect Jackson-Davis to be leading the charge.

After averaging 5.2 points per game in his freshman year, Williams upped his numbers to 11.5 points and 7.6 rebounds per contest. A 52% shooter, Williams has a clear weakness at the free throw line, but his game off the charity stripe has been on an upwards trajectory since he arrived at Purdue, and I feel like he’s ready to explode in his junior year. He showed hints at such an explosion in Big 10 play this past season, recording double-doubles in games against #13 Penn State, at Wisconsin, and versus Michigan. His true monster performance came in a brutal double-overtime loss at Michigan, where, in front of a hostile crowd in Ann Arbor, Williams posted 36 points and a whopping 20 rebounds. He’s showcased high ceiling and potential to this point, and that looks like it’s getting ready to come together, which is great news for the Purdue Boilermakers.

No chance it was going to be anyone else. This is, of course, assuming Garza comes back to the Hawkeyes for another season, which it seems likely he will do. He is currently not projected as a selection in most mock drafts, but the Iowa star was an absolute beast this past year, one of the consensus top-2 players in the country. Averaging a touch under 24 points and 10 rebounds per game, Garza scored 20+ points in his final sixteen contests of the year. Picking out his top games is to pick diamonds from piles of jewels. He put up 44 points on Michigan when they were ranked #4, 38 points against Indiana, and 34 points and 12 rebounds against a ranked Penn State squad. No contest here, Garza is the best returning player in the country, and clearly in the Big 10. 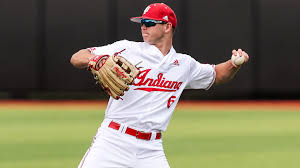 Next in our MLB draft feature series is Indiana outfielder Grant Richardson. Richardson has only played a little over one complete season of collegiate ball with the Hoosiers, but the in-state product made an immediate impact as a freshman, and he was one of the most impressive hitters in the country in his shortened sophomore campaign.

Richardson was a high profile IU recruit from the end of his freshman year of high school, and he didn’t disappoint when he stepped on campus. Starting 42 games, and appearing in 46, Richardson knocked his way to a .264 average with nine home runs, He put the Big 10 on notice in a midseason blowout of Maryland, blasting three home runs in a 5-6 effort at the plate. Overall, Richardson boasted 11 multi-hit games, leading the Hoosiers to their third consecutive NCAA Tournament appearance. Richardson was named a freshman All-American.

Although the 2020 season was cut short after 15 games, both Richardson and Indiana were on pace for great seasons, as the Hoosiers were off to a 9-6 starts with ranked road victories over #11 LSU, #30 South Alabama, and #17 East Carolina. Richardson was front and center of a prolific Indiana offense that averaged 6.3 runs per contest. Starting fourteen games, the sophomore led the squad with a .424 average, banging five home runs, three doubles, and two triples, driving in 17 runs. His five long balls led the Big 10. In the season-opening road trip to LSU, Richardson rapped out six hits in 12 at-bats, hitting a double, triple and home run over the weekend, driving in five runs and scoring four. He finished the year with 9 multi-hit games.

Grant Richardson still has four season of eligibility with the Hoosiers, so, with the shortened draft, the probability is that he returns to Indiana for at least one more season. Regardless, it wouldn’t be surprising to see Richardson’s name be called, as one team may definitely try to take a flier on the Indiana outfielder with a fourth or fifth round pick and try to lure him away from college with a signing bonus. Richardson has solid speed, running around a 6.7 60-yard dash, and his bat carries serious upside. A former pitching recruit with a 90 mph fastball, Richardson has a very solid arm. At 6’2 and 186 pounds, Richardson may also be able to fill out a little bit to add a little more power at the plate. As he continues to develop, Richardson looks like a guy that could roam center field in the MLB. Although this prediction will be for this year’s draft, don’t be surprised if Richardson returns to school, and his draft stock continues to skyrocket.

Prediction: Round 5, Pick 155, Tampa Bay Rays
The Rays have one of the best farm systems in the league, and so they can afford to take a flier on Richardson, hoping that he opts to head to one of the best franchises at developing players. Tampa Bay does not have a Top-100 outfield prospect right now, and while Richardson probably would slot into that list, at least not right away, the Indiana outfielder could become a long-term replacement plan for 30-year old center fielder Kevin Kiermaier.