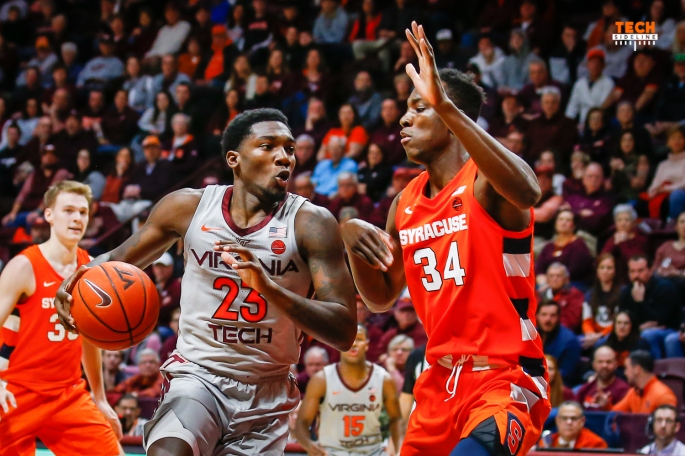 It’s not often you see a guard lead his team in rebounding, but that’s exactly what Tyrece Radford did for the Virginia Tech Hokies. At 6’2, Radford is the third-shortest player on the roster, yet he collected 6.2 boards per game, to go with 10.2 points on 60% shooting. Radford did virtually all his damage inside the arc, leading to highly efficient outputs from the Louisiana product. That efficiency was the mark that caught our attention, and it landed Radford as the #2 guard on our top returning guards to watch in the ACC.

Radford didn’t get a lot of minutes at the start of the year, only playing 20+ minutes in three of the Hokies’ first six contests, but he averaged nine points and nine rebounds in those games on 70.6% shooting. As his opportunities to crash the basket and boards expanded, so did Radford’s production. In an early January ACC contest against NC State, Radford poured in 18 points and 9 rebounds, which he followed up with a 21 point, 13 rebound, and 4 steal effort at Wake Forest.

Teammate Lander Nolley did damage beyond the arc and combined with Radford to deliver a large portion of the Virginia Tech offense. When he got more than five shots a game ,Radford averaged over 13 points per game, and his consistency improved greatly throughout the year, averaging 14.6 points in his final ten regular season games, also improving his averages in rebounds (6.4), assists (2.6), and steals (1.3), becoming an impact player all over the court for the Hokies. Amidst his various contributions, he maintained his efficient shotmaking and took good care of the ball, turning the ball over less than once per contest.

In the ACC, versatility and the ability to impact the game in different ways is critical and with just one year of collegiate basketball under his belt, the best is yet to come with Radford, who should be a dynamic player for the Hokies in 2020-21.