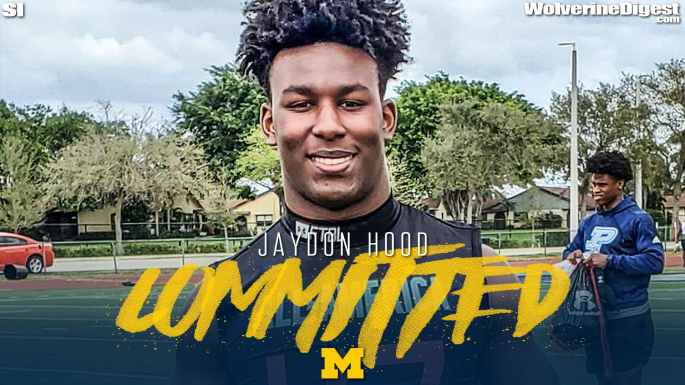 Just yesterday, Michigan got the welcome news of linebacker Junior Colsen’s commitment, and they got a double dosage of good news on Memorial Day, with linebacker/athlete Jaydon Hood announcing his intentions to don the maize and blue. The Wolverines have been producing NFL-talent at linebacker, and that prowess is showing with these recent commitments. Hood, a four-star commit out of Florida, was seriously pursued by several teams, including Louisville, Virginia Tech, Miami, West Virginia, and others. However, he ultimately joins Colsen in Ann Arbor, and he released his decision in entertaining fashion – featuring some impressive (?) gymnastics from the Michigan coaching staff.

The video was entertaining, but Michigan fans will also certainly enjoy the highlights of Hood terrorizing opposing offensive lines, as he will look to do the same in the Big 10, with Michigan’s pursuit of conference supremacy an ongoing struggle.

Recruiting was a little slow over Memorial Day Weekend, but on of the best tight ends in the 2021 class narrowed his official list to five schools, spread over three conferences. Auburn, Tennessee, Wisconsin, Oregon, and USC remain in play for Terrance Ferguson’s services. The Colorado product did not leave any in-state schools on his list. Oregon and Wisconsin are considered slight favorites, but it’s been tough to get a read on Ferguson, who hasn’t taken an official visit to any of these schools. He took multiple visits to Colorado, and visited LSU, Georgia, and Arkansas, but he ultimately left all of those teams off his list. Ferguson is the seventh-ranked tight end in the 2021 class, and he has the athleticism to play wide receiver too – he’ll be a great pick-up for whoever can secure the Colorado talent.