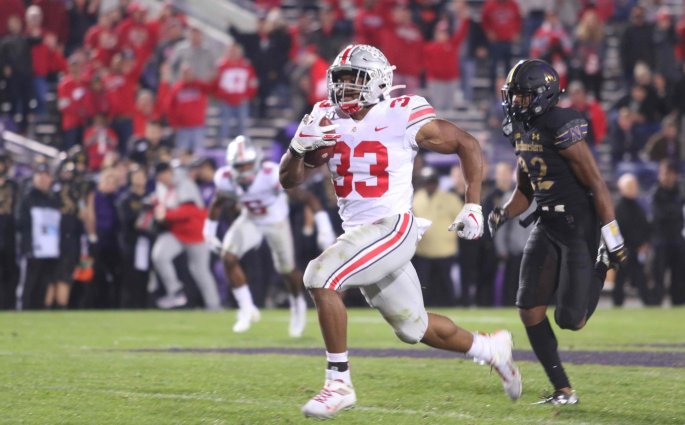 Quick, catch up. Before we unveil our full Big 10 Power Rankings and Predictions, be sure to check out our Offense and Defense previews, so you can get the full experience.

With that being said, myself and resident Big 10 analyst Chris Cimino will be wrapping up our 3-story saga previewing the conference today with final predictions. First off – power rankings.

The top of our power rankings should come as no surprise. Ohio State is the clear favorite to win the conference, with Penn State being probably their only legitimate challenger. I actually almost leaned towards the Nittany Lions before recent events steered me away from that pick. Had Penn State had Micah Parsons, and fans in their stadium to produce their annual white-out game, I may have liked James Franklin’s squad to take home the head-to-head clash with the Buckeyes. However, in a fanless stadium with their best defender gone, Penn State doesn’t quite match up with Ryan Day, Justin Fields, and Co. Master Teague takes over as the primary workhorse in the backfield, and if he equals or comes close to the production of J.K. Dobbins, the Buckeyes will roll to another undefeated season.

However, as the rankings progress, our lists begin to differ. Cimino is high on Minnesota, who returns Tanner Morgan, one of the best quarterbacks in the nation, and has a great head coach in P.J. Fleck. However, for me, the loss of Rashod Bateman leaves me with slightly more questions about the offense, and I’m not sure they have enough to compensate for significant losses on the defensive side of the ball. I slotted perennial Big 10 West favorite Wisconsin in at #4, as well as Nebraska at #6 before putting Minnesota into the seventh spot.

Our other major difference is in Michigan State. Cimino has the Spartans crashing to eleventh on his list, barely above the traditional cellar-dwellers of the conference. In doing so, he makes some intriguing bets, including banking on a rebound season from a Northwestern team with a strong defense, and a better season than I expect from Indiana. I have the Spartans cracking my top-5 which may be high, but also reflects my belief that this a very top heavy conference. I don’t think there’s very many teams I would consider nationally relevant after Ohio State, Penn State, and maybe Michigan. Wisconsin has a case. But that’s about as far as I’ll go. Michigan State at 5 or 11? I’m not sure it makes a huge difference for me, but I think the Spartans can pull off 5-6 wins in Big 10 play.

This is Ohio State’s conference to lose, and neither myself nor Cimino see that happening. Ohio State’s stranglehold over the Big 10 continues. Their trickiest game is undoubtedly their clash with Penn State, and I really don’t see a team out of the West challenging the Buckeyes significantly in the conference championship. Cimino sticks with his Golden Gophers to make the title game, while I go with a repeat of last year’s championship. I think the West division is wide open, so I went with the consistent Badgers, who haven’t had a losing season since 2001. However, Tanner Morgan alone makes Minnesota a contender at least for the division crown, so the Gophers are a worthy pick here as well.

Coach of the Year predictions

Although I picked Ohio State to win the conference, I’m not going with Day for Coach of the Year honors. Quite simply because 10-0 is the expectation in Columbus, so to give him COY for meeting the standard seems underwhelming. Rather, I’m going with Franklin. Although I don’t quite see him breaking through into the CFP, I think a 9-1 season in which they lose a large portion of their significant homefield advantage and have already seen one of their best players opt out would be excellent work by Franklin. Cimino goes with the likely safer pick in Ryan Day, who impressed greatly in his first season replacing Urban Meyer, and he’s an instant favorite for the award.

After releasing our Big 10 offensive player of the year predictions a day ago, myself and Chris Cimino have returned to offer up our predictions for the best defenses in the Big 10, along with DPOY picks. Our offensive previews were very similar, as we both agreed that Ohio State and Penn State are the offenses to watch, while the Tanner Morgan-led Minnesota squad is an intriguing third team to keep an eye on. Does the same story ring true on the defensive side of the ball? Let’s check it out.

Once again, both Cimino and I come up with extremely similar rankings when looking at Big 10 defenses. Ohio State is just a beast on the defensive side of the ball, and although I was a little hesitant about placing them over a Penn State defense that returns a lot more production, the recent opt-out of stud linebacker Micah Persons convinced me to slide the Nittany Lions to #2. Shaun Wade is the latest in a series of elite cornerbacks to come out of Ohio State, and he leads the Buckeyes into action in 2020.

Cimino agrees with me at 1-2, but we do differ with our third team. I initially slotted Wisconsin in here, and they are undoubtedly a solid pick. The Badgers boast a stout defense year-in and year-out, and they return a lot of production – headlined by Jack Sanborn, who recorded 5.5 sacks and 3 interceptions in 2019. I went with the Michigan Wolverines for my third best defense, but it was a really tight call. The ultimate deciding factor for me was Michigan’s starpower, as I believe they have two of the best players in the conference in defensive lineman Kwity Paye and cornerback Ambry Thomas. Michigan will be strong on defense, but it may not be enough for them to tip the scales in the Big 10.

This list has at least a little bit of variation after we appeared to agree on much of our initial sets of rankings. We both like Wade to take home DPOY honors. The Ohio State corner broke up eight passes and intercepted one last season, while playing in a secondary that had two first round picks. He also forced a fumble and had two sacks, and his numbers should explode as the star of Ohio State’s defense in 2020. Paye was the consensus #2 player, returning after a breakout 6.5 sack season. He also recorded 50 tackles and recovered a fumble, and he will be a key cog in Michigan’s defensive gameplan, responsible for causing disruption along the defensive line.

After our top-2, our lists vary slightly. Purdue defensive lineman finds his way into both of our top-5 rankings, sliding in at #3 in Cimino’s list and #4 in my own. I have Michigan cornerback Ambry Thomas checking in as the third best defensive player in the conference, while aforementioned Wisconsin linebacker Jack Sanborn rounds out my list. Cimino goes for a player that may be a slight surprise to some, ranking Paddy Fisher fourth. The Northwestern linebacker will be the anchor of a unit that doesn’t quite look ready for Big 10 contention after a 1-7 record in Big 10 play last season. Cimino also goes with a second Michigan player, opting for linebacker Cam McGrone to fill out his top 5.